Finished up the joints for the remaining seats this weekend. Ellen didn’t think I was giving an honest portrayal of the working conditions in my shop, so here’s a full view, showing all eight seats in situ. 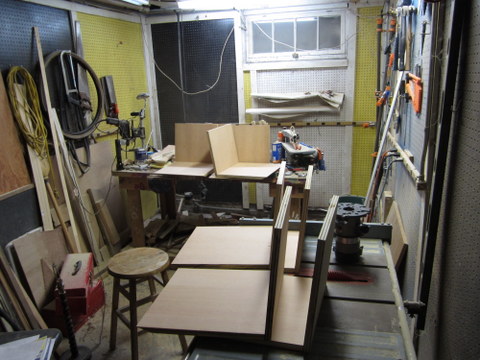 I’m relieved to have finished these joints, probably one of the more exacting tasks in this project. The joints came out pretty well, with only some small gaps (< 1/32") visible on the exterior. I should be able to close most of those up with a little more filing and chiseling, but for now I want to move on to something else. Next up: I have a mind to try a pair of sliding dovetails inside the acute bends.

I forgot to post these awesome photos of the zigzag bevels from a few weeks back. It was a joy cutting them with a new supersmooth sawblade with lots of teeth. 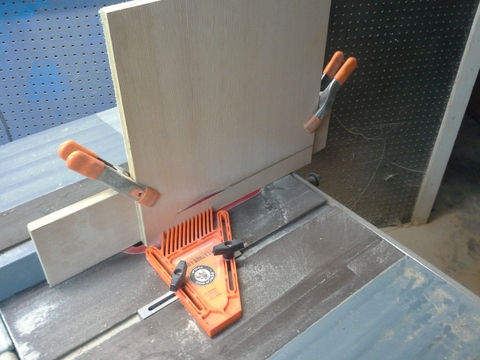 The clamps hold the piece tight to a board that slides along the saw’s fence. Without this only a tiny edge would be riding on the surface of the saw. The orange plastic thing holds the piece being cut securely against that arrangement, helping to make sure the cuts come out straight and even. 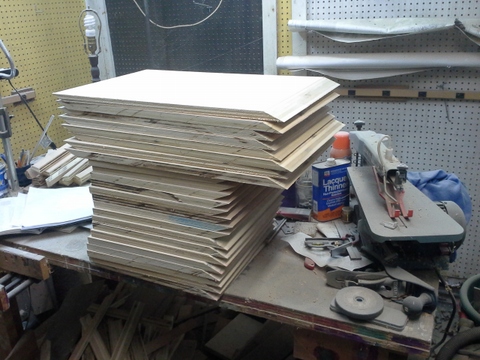 The setup I made for cutting the dovetail coves wasn’t enough to cut the needed space in a single cut. Now I need to do another pass over them in order to get them deep enough and to cut the insides at the 8 degree angle needed to lean the backs. 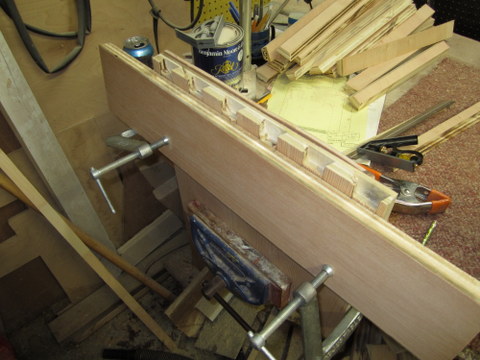 Notice how the board clamped to the front side is angled. The router base will rest on it and cut at the same angle inside the joint. 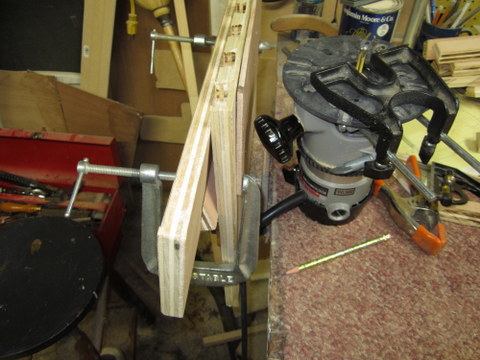 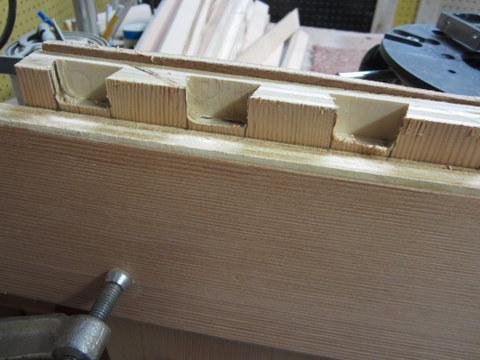 finishing up the dovetail coves

The router is an awesome, powerful tool that can make cove cuts that can’t be done with a saw. In the old days, you would use a some combination of saw & drill (auger, gimlet) to get rid of as much stock as possible and then finish up the edges with a chisel. The router gets much closer to the edges of the joint, but it still leaves rounded corners. For the final cleanup and fitting, we need the chisel and file. 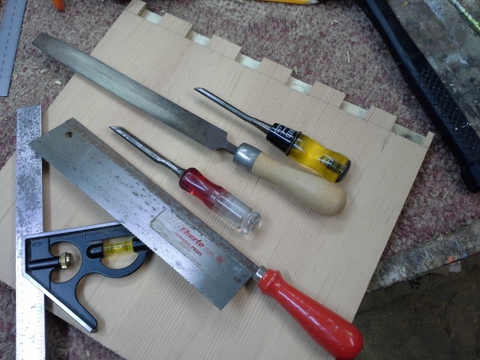 The first of the tails, marked up and ready to be cut. I tried doing this free-hand with the router, but discovered it was too hard to cut a clean, straight line. For the rest, I’ll use the saw to cut along the marked lines before cleaning out the waste with the router. This will also help prevent me from ripping the veneer facing off a large section of the plywood. 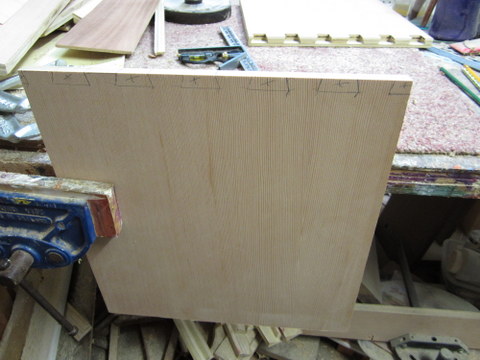 Here you can see the surface torn out from one the tails cut before I outlined the tails with the handsaw. Thankfully it’ll be under the seat. 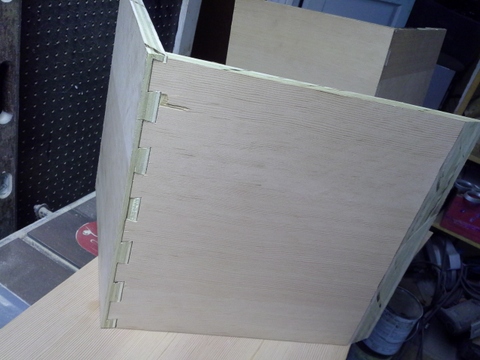 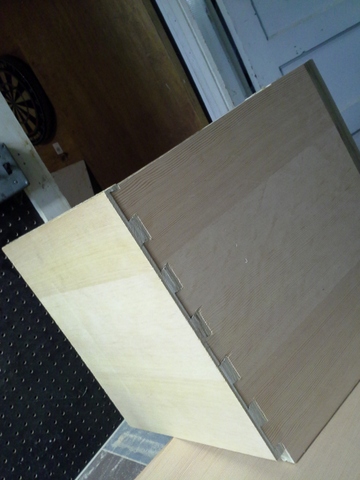 Our first seats! It’s so satisfying when the joints come together. 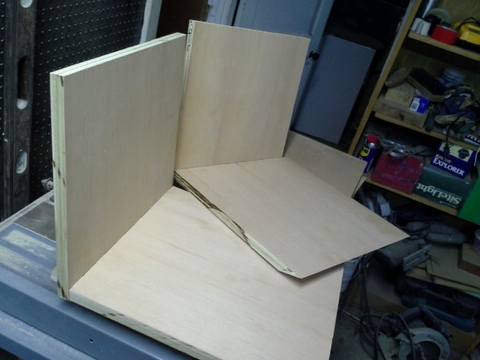 Just a quick update on my progress; I bought myself a new 1/2″ dovetail router bit ($20), and got to work cutting the joints. Almost half the time spent planning, setting up, and cutting tests. The first picture below shows the setup: 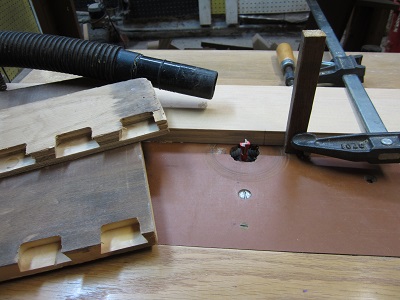 In the next picture you can see the results of a few hours at the router table cutting the half-blind dovetail coves in the backs. Notice how the coves don’t pass all the way through the boards: that’s the half-blind part. Initially I had hoped to place the cuts in identical locations on all the backs so that the tail half of the joints could be cut all in one pass, across all the seats at once. Alas, I don’t think that’s to be. There was just too much variability in my setup, even with the nifty jig. 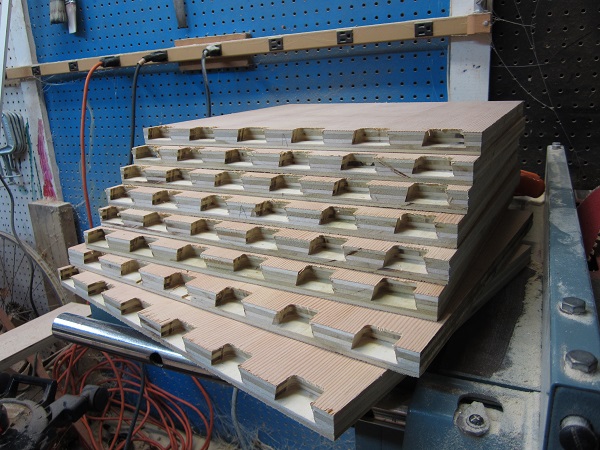 Next I’ll need to clean up the backs of the coves to make them square with the surface, and chisel out the rounded corners. Then bevel the ends (8 degrees, remember?) cut the tails, and of course the joints will slide together neatly on the first try! 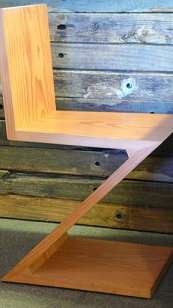 example of a Zig-Zag chair

Some friends (well, one friend) expressed some interest in the chair project I crowed about on facebook recently. So I decided to document the project here. The idea of making a Rietveld Zig-Zag chair was my father’s: he conceived a desire for one, and bought some books and plans. I think he was attracted by the idea that he could make it himself, but eventually abandoned that plan, and sent it to me. In fact the design is deceptively simple: it was described by Dutch designer Gerrit Rietveld in 1934 as a “plane zigzagging through space.” My father wanted a single chair. I looked at the plans and photos, and I realized this would be more than an afternoon’s work. An interesting project, but I had lot of interesting projects at the time, so I put it away.

When I finally came back to the project a few weeks ago, and looked more seriously at the design, I realized that making just a single chair of this type would involve a great deal of wasted effort. The chair’s construction involves several tricky features that belie its simple appearance. Setting up the cutting jigs for these angled cuts and joinery takes time, exacting measurement and careful planning, but the cutting itself is mere rote work: satisfying, easy work on a modern machine.

Furthermore, it was clear from looking at them that Rietveld’s designs were always intended to be mass-produced, and a little reading lends some credibility to this as an accepted historical idea. It is tempting to read the De Stijl movement’s obsession with right angles and rectangles as an embrace of industrial methods. Of course it’s difficult to know: there was a natural reaction against the earlier prevailing Impressionist style, and it may simply be that Rietveld saw an opportunity to capitalize on the style’s suitability for factory manufacturing techniques.

At any rate, I determined to make a set of eight. In this way I could achieve economy of scale by reusing the various table saw and other cutting jig setups I would need to make.

Chief among the difficulties with this chair are the two acutely-angled joints connecting the diagonal member, the “leg” if you will, with the seat and with the base. Usually in finer woodworking one joins pieces without nails, bolts or other hardware, ideally holding them together without even glue. But there really is no classical all-wood joint for the zigzag chair’s acute angles, at least not anything that would support a person’s weight. Classic zigzag chairs use bolts to hold together the two acutely-angled joints. Bolts! I never dreamed of holding together furniture with bolts. I consider using bolts and hiding them, but I don’t particularly like the idea of this kind of subterfuge. At any rate it would be impossible to truly hide the necessary plugs since their grain wouldn’t match. Still we might come up with some other solution.

The other challenging piece of joinery comes between the seat and back. Dovetail joints are called for here: these are the strongest joint for a right angle between boards. Cutting dovetails requires a certain finesse and careful craft with hand tools, or specialized cutting elements for machine tools. I resolved to acquire a dovetail bit for my router that would make it easier to cut the 40-odd tails in these eight chairs. But the back is not at a right angle to the seat. It reclines by 8°, accommodating the human form in a necessary compromise with the purity of the De Stijl movement’s Cubist-informed aesthetic. The resulting joints will have to be cut at an angle 8° from square, forming a mind-bending three dimensional puzzle that I struggle to visualize even with the aid of drawings.

Finally, I complicated the picture a bit further by the use of plywood. Plywood is not often used in fine furniture, but I felt that it was an attractive choice for this project for several reasons. For one, fine plywoods are available (not at all like the construction-grade kind you see at home improvement megastores), and these offer a surface with a large swath of continuous grain. To achieve a similar effect with solid wood would require very wide boards that are not easy to find. Also, I wanted a fine-grained appearance that would require quarter-sawn lumber, a wasteful luxurious product that is almost vanished in this time of scarcer forest resources. I simply felt the idea of using an economical material like plywood would fit better with the industrial aesthetic of the chair design. And finally manufactured boards (plywood) are greener: they make the most efficient use of trees since they are able to use junkier wood on the inside, and save the good pieces for the surface.

The problem with plywood is that its end grain is really unattractive, and tends to get uglier still as it loses little chips during the construction process. The usual technique for dealing with this is to cover the ends with thin strips of solid wood, or veneer, but there was one place on the chair where this technique would not work: the back/seat joint. So I’ve resolved to further complicate the construction of that joint by making it half-blind: the ends of the seat tails will be buried in the interior of the joint, allowing the exterior surface of the back to descend uninterrupted to the outside of the angle with the seat. We’ll see how I manage that as the work unfolds!