I’m reviving this blog years because I feel like sharing a project I’ve been working on: building a skin-on-frame kayak. I don’t propose to teach how to build a kayak; I’m just learning! Nor is this a history of The Kayak. This is a personal journey of escape and discovery. I will share what I learn, the mistakes and struggles. Hopefully it ends with me in a boat on the water. Maybe I’ll even learn to roll it. I hope folks will find this interesting. For me it has been truly life saving.

[Note: about this blog, and comments. No more comments 🙁 I would love to get your comments! But the internet does not make it easy. When I last checked I had almost 100,000 spam comments, and I don’t want to devote my life to defeating spam. So … if you want to reply to me, send me a note on twitter, where I am @msokolov].

I was largely working at home before the Pan***ic started, so at first I hoped it wouldn’t make all that much difference to me, but after months of basically never going anywhere except upstairs and downstairs, and occasionally out in the yard to fill the bird feeder, my life started to feel pretty low-dimensional. Eat, sleep, crap, work, rinse, repeat. Shower occasionally, and maybe cut my own hair. I think we’re all living some version of this. So I started coming up with stuff to do at home. Picked up the piano again, played some video games, but I found myself dreaming about a life out of doors.

I’m not sure exactly where I got the idea to work on making a kayak. Maybe because my daughter has been working on a fantastic boat restoration project. Maybe because a boat fantasy is a pretty good way to dream of a life of adventure while cooped up indoors during a New England winter during a raging pandemic. For whatever reason, the idea of building a boat crept up on me until it seemed I just had to do it. Over the years I’ve leveled up my amateur woodworking skills and tools, so I managed to convince myself I was ready for some kind of boatbuilding project, but I wanted to find something on the right scale, and a kayak is just about the smallest watercraft there is. Its prehistoric roots also gave it an appealing glamor. Early Americans made kayaks from driftwood, bones and animal sinew that were sturdy enough to use for hunting whales in the open ocean! Surely with modern tools I could accomplish something that wouldn’t sink?

I started by clearing out our semi-finished garage-turned-extra room and buying some books. Cleaning out the room rapidly devolved into a yak-shaving exercise. Where would all the stuff go? This included some large family heirlooms, a guest futon couch, a big piece from our youngest daughter’s senior thesis project, and these larger encumbrances were surrounded by the other more minute detritus accumulated over the years in this out of the way corner of our house. I am pretty ruthless about throwing things away, but a lot of this stuff needed to stay. What about the family VHS collection? Disney – in the trash. Unlabeled VHS cassette? It might have somebody’s birthday on it! I made a box to send to a digitization service some day. It was a challenge not to become overwhelmed by all the stuff. At one point, I thought I might pull up the ratty old carpet and tear down the sagging ceiling. I fantasized about trash bags full of plaster and watched online videos about pulling up carpet tacks. In the end I decided none of this was essential to my project though. Happily I was able to repurpose some of the items for use in my new workspace. Here’s a glimpse. At least I would have decent light, especially after rewiring some defunct standing lamps we had stashed away in the basement. 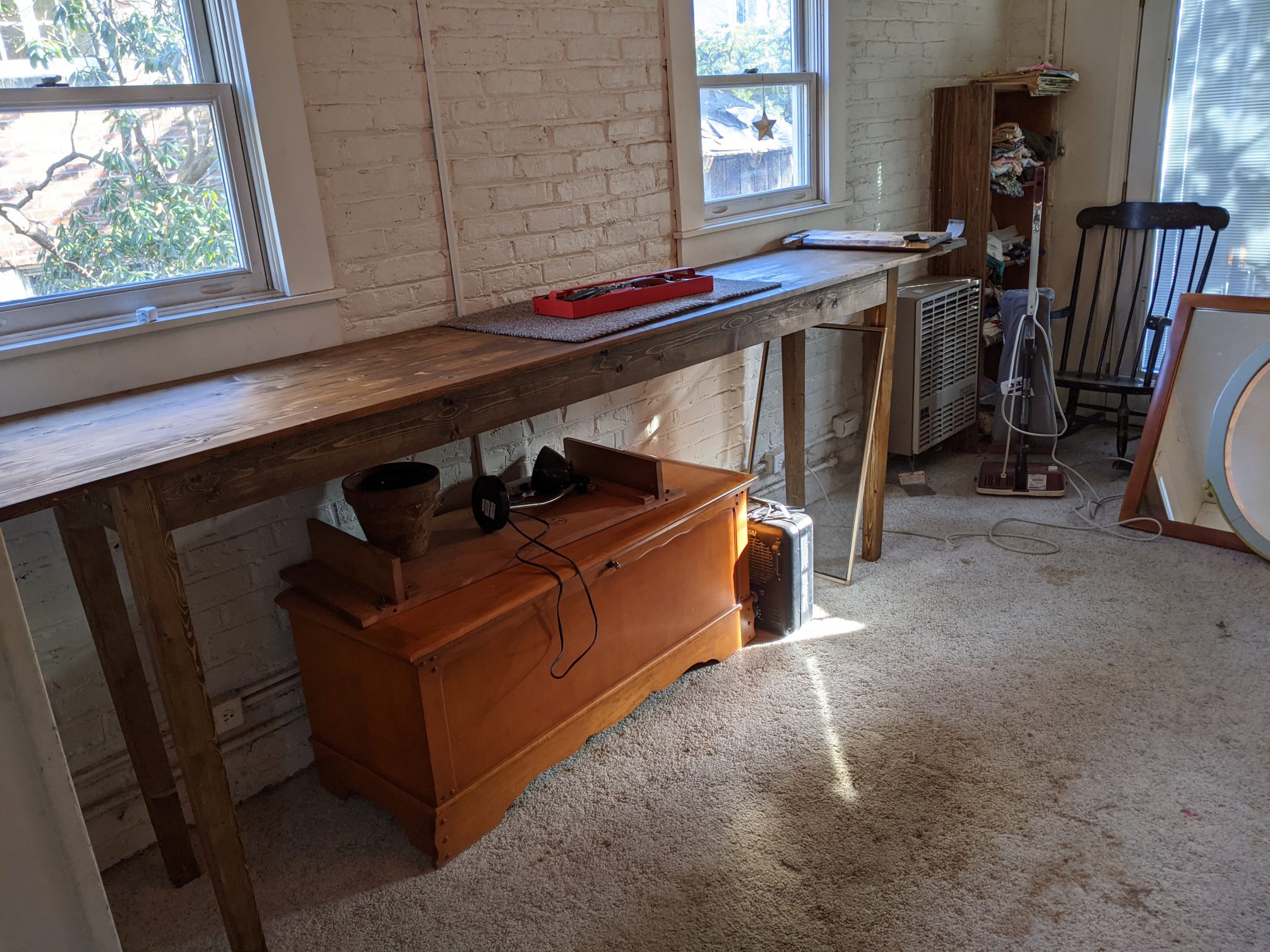 I bought a random sampling of how-to books about kayak making. There has been an explosion of books in this area: apparently I’m not the only one with this itch. The one I ended up settling on as a guide was Building the Greenland Kayak, by Chris Cunningham. This book’s esthetic appealed to me, as did its detailed instructions. The kayak design it presents is (I believe) closely copied from traditional models in its shape and parts. The ribs that form the hull are bent wood, and the joinery is all dowels and lashings; no glue or screws are used. The materials called for are adapted somewhat for modern usage, mainly in the covering, which is not going to be sealskin, but nylon or canvas (I chose canvas). Cunningham also presents various construction techniques adapted for whatever power tools may be available. He indicates possible approaches using only hand tools at every step, but it certainly would be a lot more work to mill the long stock without a circular or table saw. Apparently one traditional method of making ribs flexible enough to bend was to chew on them. I opted to save my teeth and make a steam box.

Another book I enjoyed reading on the subject was George Putz’ Wood and Canvas Kayak Building. This book is encrusted with salty Maine wisdom! I think its designs are less fussy to build, and probably a bit more comfortable, if heavier, than the bent-rib Greenland variety. Rather than bent ribs for a frame, Putz’ boats deploy a trestle-like amalgamation of cross-members along with floor “timbers” for their hull, and he has no pretense of traditional construction, relying on screws, glue and other fasteners throughout. I might try these ideas next time. I also consulted Fuselage Frame Boats, by Jeff Horton, which presents yet another approach to wood kayak construction; plywood frames to shape the hull (the fuselage).

Finally I should mention Brian Schulz of Cape Falcon Kayak. I chose not to enroll in Brian’s course or buy his plans, but I did learn a lot from the videos he has posted online, especially his excellent advice about steam bending.

I have lots more to say, but not today. Next time I’ll start gathering materials and making the first cuts.