It took me a couple of weeks to get the finish done. Coating the canvas with butyrate dope was pretty easy, although I learned that the ventilation in the converted garage room was not all that great, and ran around opening all the windows in the house to flush out the toxic fumes; not before I was discovered though. The thing that really took a while was the varnish I layered on top of that. The book proposed coating the transparent undercoats of dope with more layers of pigmented dope – paint, basically. But I wanted the my dye job to show through, so I was committed to use a transparent finish. I guess I could have just use more layers of dope, but I used a whole gallon on three layers, and this stuff was pretty expensive – around $80 for the gallon.

So for the final layers I used spar varnish, which is a heavy-duty traditional oil-based varnish. It’s also about $80/gallon at my hardware store, but I was able to apply three coats using only a pint of the stuff. Unfortunately the first coat I applied using some old stuff I found in the basement. It seemed OK underneath the top layer of hardened semi-gelatinous varnish, if a little dodgy. It was kind of thick, so I thinned it with some paint thinner and applied with a rag. It went on like runny snot and didn’t seem to want to dry. Maybe because the temperature dropped into the 40s and it was raining. Varnish likes it warm and dry. I ran the heater and the air conditioner (to pull moisture out of the soupy air), and kept on checking. After three days it was still kind of tacky. I rubbed it down with paint thinner, scraped off the worst bits of goo and bought some new varnish and Japan dryer, an additive that is supposed to help varnish dry in colder wetter conditions.

I think in the end it came out nicely, although it’s far from professional standard as such things go. 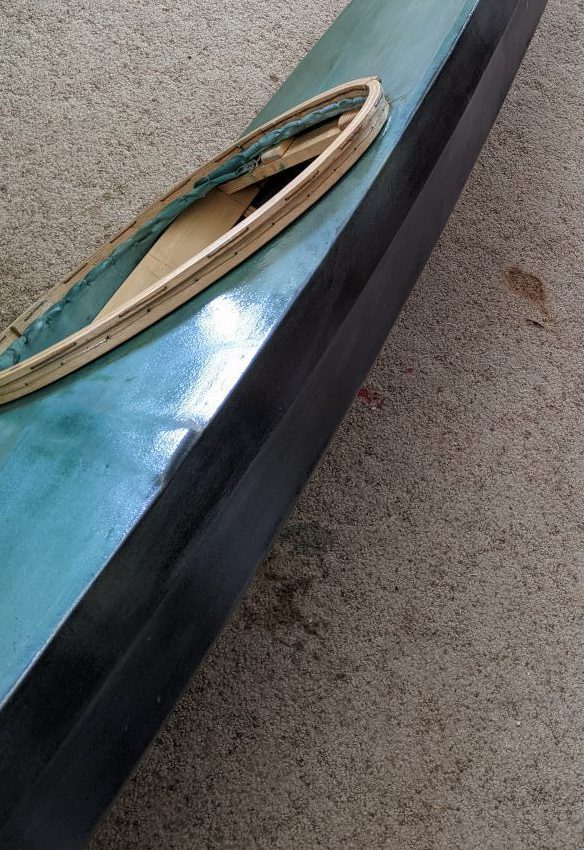 Here’s a full view from the top. I’m pretty happy about the slightly irregular dye color. 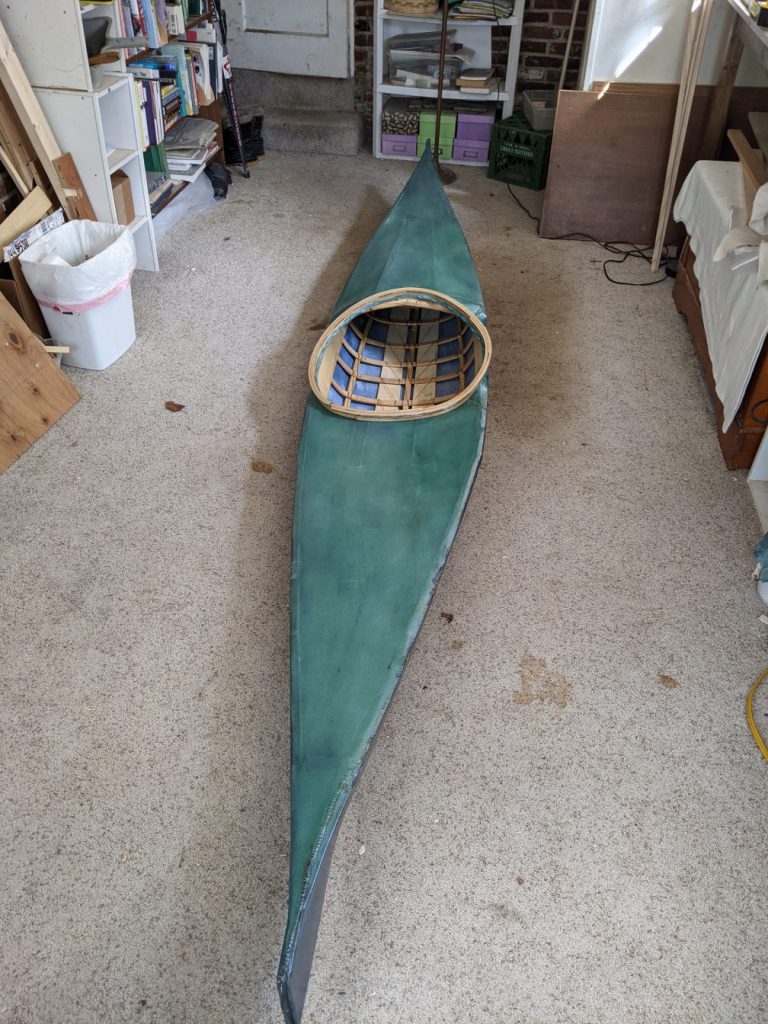 And finally, it’s a she, and she floats!

How does she float? Well, I am really pleased. No leaking, that’s good. Much tippier than my old plastic tub, but I got used to this pretty quickly while paddling. The fit is kind of tight, but it seems right. I can securely brace my thighs against the Masik and paddle comfortably. After 45 minutes of paddling though my left foot was going numb. I have the same problem when running sometimes; bad circulation I guess. I hope that I will get used to the position, but we’ll see.

Generally speaking, she tracks quite well. Turning is a more deliberate process than with the flat-bottomed 9-footers, which spin like tops. There is a nagging tendency to pull to the left though, that really does need to be corrected. I think the stern piece must not be quite straight. So I’ll probably add a skeg, an external fixed rudder-like attachment, to get that worked out.

All-in-all a success! I look forward to many more days of paddling.